Sharks belong to the class of cartilaginous fishes called the Chondrichthyes in which other animals includes like Stingrays, Batoids, Chimaeras, and Sawfishes. Chondrichthyans has various socio-economic purposes and distinctively, these fishes provide meat and shark fins for human consumption [1]. A common delicacy using shark fins is the shark fin soup that became an important Chinese cuisine since the 14th century and was established as a traditional component of formal banquets [2]. Throughout time, the shark fin soup has spread to the rest of the world that immediately lead to higher demand for shark fins and its international trade. 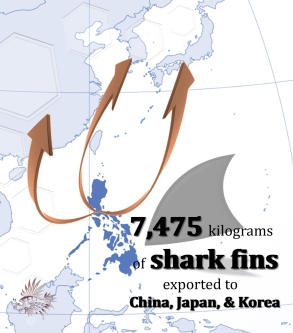 In 2017, the exportation volume of shark fins in the Philippines has been recorded at a total of 7,475 kilograms which has an estimated value of around USD 80,000. Major importing countries are China, Japan, and Korea [3]. Considering the high-value market of shark fins, it is likely that more people shall see this as a business or an income-generating opportunity.

The data provided by the authority does not reveal what shark species were sourced for the exported shark fins. Moreover, it was also not indicated where did the shark fins specifically come from. But assuming that all exported shark fins are sourced from adult Blacktip reef sharks (a common shark in the Philippines) in which a single adult shark has fins weighing about 6.5 kilograms, hypothetically 1,150 or more Blacktip reef sharks were killed to supply the export demand. Now, an important question is, is the exportation volume of shark fins in the country is still ecologically safe for shark populations or is it already becoming detrimental to the marine biodiversity?

To date, there is no effective national law causing for the total ban of shark fin exportations. Only those species listed in Appendices of the Convention on the International Trade in Endangered Species (CITES) or those categorized by the International Union for Conservation of Nature (IUCN) as ‘threatened’ which are currently protected by the country’s legislation through The Philippine Fisheries Code of 1998. Therefore, as long as the shark species is not threatened nor CITES-listed, the trade of shark fins shall remain legal in the country and so does the continuous decline of shark populations. But to bring light, there are already pending national legislations promoting the protection of sharks and its allies. These legislations are still under review and are for further approval of the government.

Concerned authorities of the country should provide appropriate management measures on the ground to properly regulate the catch and trade of sharks. This is to balance between human needs and the integrity of the Philippine marine ecosystem. But in order to do this, they should first facilitate stock assessment of the current shark populations in the country. It will classify sharks species which are at high risk of global extinction and hence the creation of conservation or management plans for this species.

Sharks are believed to be vital in maintaining marine biodiversity. Since they are often the top predators in their ecosystems, the depletion or removal of sharks is likely to affect the abundance of other aquatic species in ways that cannot be predicted [4,5]. For this reason alone, conserving these ecologically and economically important marine species is extremely crucial especially the Philippines for it has been described as the global center of marine biodiversity. |

More on sharks through the following: